A friend of mine asked me how they could automatically follow and unfollow people on Twitter. But they didn’t want to follow just anyone and everyone. He had a Twitter account which they used for recruiting in a very narrow construction industry. He wanted to find people in the same industry and follow them – hoping they would follow him back and learn about his open jobs. When I joined Twitter back in 2008, I wrote a similar program to automatically follow/unfollow users, but the Twitter API has changed quite a bit since then. So I decided to re-write the program with the latest Perl-Twitter API – Net::Twitter::Lite::WithAPIv1_1.

Before you attempt to use these scripts, you will need to register your application with twitter via apps.twitter.com, and obtain the following:

When running these types of scripts on Twitter, you have to be careful to not surpass the rate limits that Twitter has established for using the API.  I have included a script named rate_limit.pl – which can give you the limits you have for each API-call, and how many calls you have remaining before the limits are reset by Twitter.  I have added pauses in the scripts to help prevent you from going over the rate limits (but you will need to check to ensure you don’t surpass them).  You are free to modify these scripts (but I won’t be able to help you figure out how to do this.)  The rate limits may be found at https://dev.twitter.com/rest/public/rate-limiting.  The key with using the Twitter API is to not be too aggressive, or your app will be banned by Twitter. For example, Twitter does not allow bulk follows and unfollows – so having patience is important.

There are several programs involved, and all of them utilize MySQL databases to store the information.  A summary of the scripts are as follows:

followers_find.pl – To use this script, you choose a Twitter user that has an audience similar to yours, and then follow their users.  For example, if you want to follow cat lovers, you could grab the followers of the Twitter user named @Cat.  This script will pull the last 5,000 followers of @Cat, and place those user ID’s into a database named follows_other_users.  The script will also save the cursor information, so you can run this script multiple times to obtain a large pool of users, and avoid duplicates.  This script stores the account you followed (@Cat) and the user_id of the follower.

friend_lookup.pl – This script takes 100 of the user ID’s from the follows_other_users database, pulls the user’s details from Twitter and inserts this information into the twitter_users database.  The user information includes the name, the user ID, number of tweets, how many followers, how many people they are following, time zone and description.  You can modify the database and the script to include or omit other pieces of information.

follow_user.pl – This script follows users from the twitter_users database, based upon the percentage of followers/following and the number of tweets (you can change the search criteria).  For example, I didn’t want to follow someone who was following 2,000 people but only had 100 followers.  I wanted the followers/following ratio to be a little more even.  I also wanted to follow people who had posted at least 30 tweets.  Even though the followers_find.pl script downloads the information for 5,000 users (at a time), you might only follow a couple hundred of these users who fit your criteria.

friends_follow_check.pl – This script will check to see if a user you followed has followed you back, and if not, then the script will unfollow that user. You will need to specify how many days to give someone to follow you back before you unfollow them.  For example: You follow a group of users on 10/05/2015 (the database stores what date you follow someone). You decide to wait five days to see if anyone from this group follows you back. Therefore, on 10/10/2015, you can run this script and change the $date_to_delete variable to 2015-10-05, and the script will unfollow anyone you followed on 2015-10-05 (or prior) who is not following you back.

This diagram shows you the steps for each script and to what database they connect: 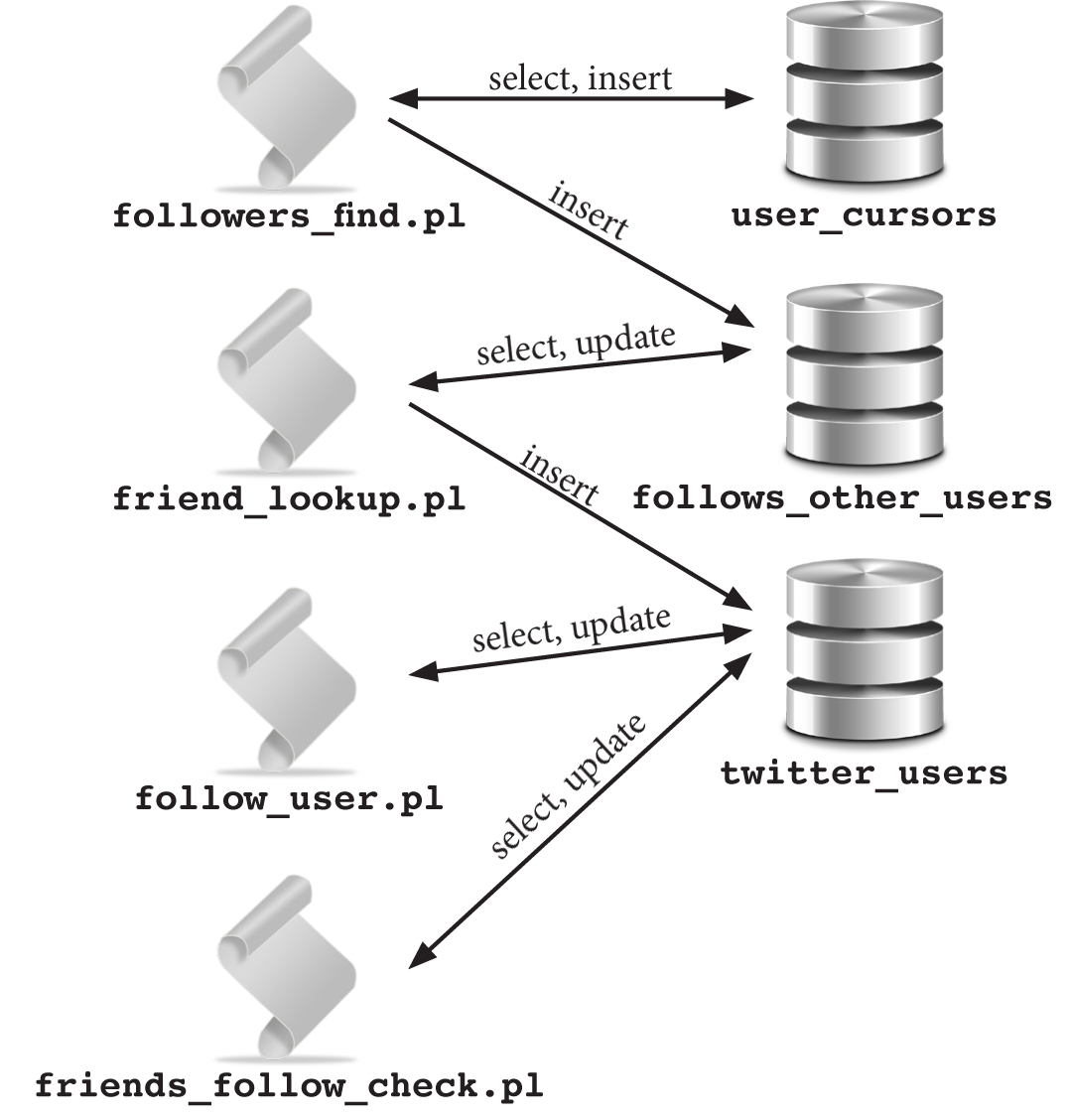 More details on each script:

followers_find.pl – Use this to grab followers of a related Twitter user by providing a value for $user_to_find_followers. This value should be the Twitter user’s name without the “@” symbol – and not their description name. The script will insert 5,000 followers at a time into follows_other_users and insert cursor information in user_cursors.

This script uses the followers_ids API call, which has a limit of 15 every 15 minutes. When you run the rate_limit.pl script, you can see how many calls are remaining:

friend_lookup.pl – Selects users from follows_other_users, gets the user’s details, and then inserts the information into twitter_users. The script can get information on 100 users at a time. Some users may produce an error, and the script will stop. If this happens, just re-run the script. If the script still has an error, delete that user from the database.

This script uses the lookup_users API call, which has a limit of 180 every 15 minutes. When you run the rate_limit.pl script, you can see how many calls are remaining:

For some reason, when I ran this script, I would get an error on a particular user. I spent a lot of time trying to figure out why the error occurred, but there were too many unknowns as to why the error existed. So, when the script finds a bad user, it updates the follows_other_users database and marks that users with an error (err). You may have to delete a user from the follows_other_users if the script doesn’t automatically mark the user with an error and the script exits immediately after running it.

This script uses the create_friend API call. The web site does not specify the limit, and the limit does not appear when you run the rate_limit.pl script. I only follow 10-20 new friends an hour – to avoid Twitter’s ban on automatic bulk follow/unfollow.

Before you run this script, you want to be sure that you have enough users in the twitter_users database that fit your search criteria. Use this SQL command to find the number of users available for you to follow: (and feel free to modify the criteria)

The number of users to follow is set with the $limit variable, and I have it set to 250. This means the script will follow 250 users before quitting. I used a sleep command (a random-length pause between six minutes ($minimum = 360;) and twelve minutes ($maximum = 720;) between following users so Twitter doesn’t think you are a robot. You may adjust these values as well.

friends_follow_check.pl – Selects users you followed from the twitter_users database and unfollows them if they haven’t followed you. It updates twitter_users with the unfollow information.

You can always change your search criteria to be less restrictive, in order to find more followers. But I have found that a strict search criteria removes most of the spammers.

This script uses the lookup_friendships API call, which has a limit of 15 every 15 minutes. When you run the rate_limit.pl script, you can see how many calls are remaining:

In each of the scripts, you have an option to print out the results from the Twitter API call. You will need to uncomment (remove the #) from these lines:

Also, there are print statements that have been commented out as well. Uncomment them if you want to see the output.

Here are the CREATE TABLE statements for each database. Some fields are longer than you would think they should be, but I did this to leave room for special characters which are longer than one character (I had to use decode_utf8 on names and descriptions):

In the subroutine ConnectToMySql used in the Perl scripts, I store the MySQL login credentials in a text file one directory below where my Perl script is located. This file – named accessTweets contains this information:

The scripts are also available on GitHub – https://github.com/ScriptingMySQL/PerlFiles.

I am not the best Perl programmer, nor am I an expert at the Twitter API, so there may be a better/easier way to do this. Good luck with the scripts and let me know how they work for you. And follow me on Twitter at ScriptingMySQL and TonyDarnell.